I was given the opportunity to take some photographs of a marriage proposal a couple of weeks ago.   The couple had grown up in school together and had know each other as kids, but just in the last few months have been reunited, and are now just crazy about each other. What a honor it was to be a part of this special moment.

If you have been following my blog and the start up of my new photography business, you are familiar with the demolition of the original John Marshall High School in Oklahoma City.  If not then please take a look at my homepage, and click on the JMHS pull down menu and take a look.   It was during this demolition process that so many of the alumni from all generations came together.  As you can see in the photos there were a lot of good items, that if left in the building would have been demolished.  So the alumni would gather on a nightly basis to go into the building and salvage all they could carry, or roll out of the building.  Everything from lockers, to doors, desk, chairs, chalkboards, glass blocks.... tons of glass blocks.....  wood wall panels, flagstones, everything that could be removed was removed.

I made a lot of new friends through this time.  And this is when couple that is the subject of this post became reunited.  The only part of the building that still remains (at least as of noon of the day I typed this) was the front steps to the school.  So Curtis said, "What better place to propose to her than the last remaining part of the school that brought them together?"  So he set out to make that happen.

Photographically speaking, I faced some real challenges.  The property is now surrounded by chain link fences, which I have dealt with before, so I just shoot a long lens and keep the depth of field short, and just like that, no more fence.  The lighting was also a bit tricky as well. Then there was the fact that she did not know what was happening. So I needed to just try to blend in, which was not too hard, as she was used to seeing me with a camera in hand running around the school.  However there is not much left to shoot.  I don't think my being there raised any attention or questions for her.   All of these things mainly limited where I was going to have to be to get the shots.  Fortunately had arrived several minutes ahead of them, so I was able to figure out how best deal with all these issues.

So on to a few of the images.

These are the front steps to the old school, and all that remain.

Setting up for the big question

Wonder what they are talking about?

Down on one knee, can only be one thing. 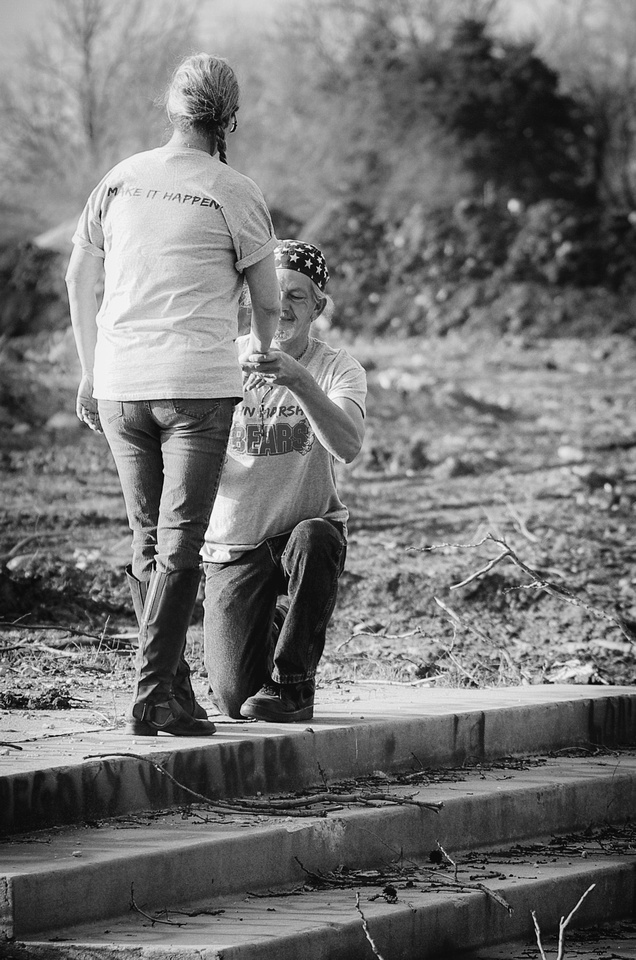 On one knee can only mean one thing

Then a walk around the piles of debris 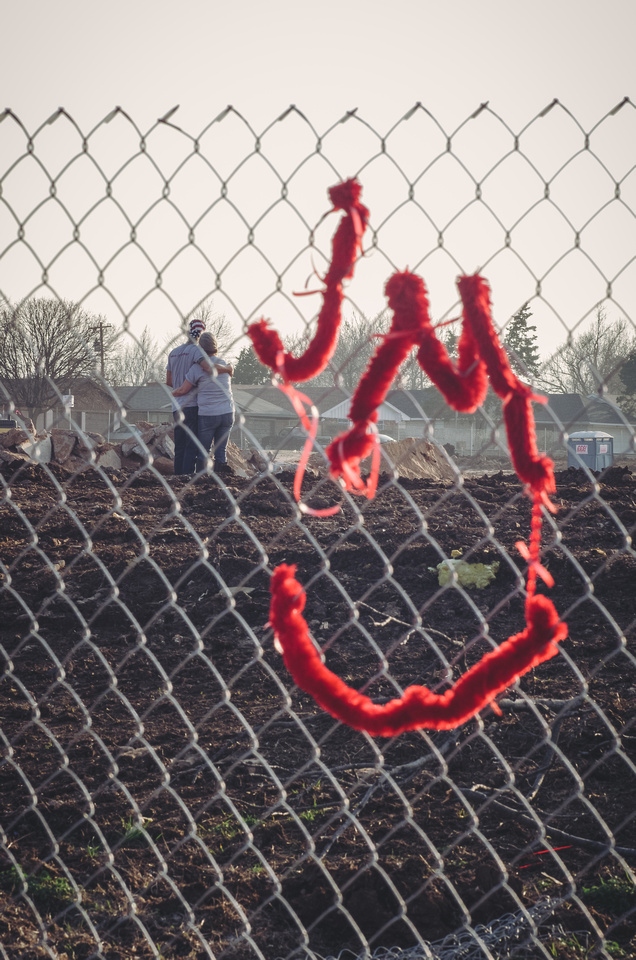 I could not be happier for my two new friends.  It has been a privilege to get to know them both as their relationship grew.  I wish them the best as they continue on their journey.  It was great to see a happy end to the history of the old school.

David Malone(non-registered)
Even though I know the fairy tale story that came true, your photos and words definitely bring it all together as if a person was standing there watching it happen before their very eyes. Great work and my best wishes for the fairy tale couple as they move forward in their next chapter of life.
Debbie Bass(non-registered)
Congrats you two! And David thank you for a wonderful history in pictures of the end of an era and the beginning of new life of two people. Glad something great came from it.
Claudia Melinda Moore Hollingshead (Mindy)(non-registered)
This is just the coolest, most romantic, story ever!!! It even brought me to tears! I graduated from here in 1976, live in Texas, & have been following the demo of our awesome school through your photos! I thought it was SO sweet when I heard of these two getting reunited, & now they are engaged!!! It's also SO romantic of him to propose to her on the school grounds before it becomes something else! I am thrilled to have been in on their story from the beginning! I wish them all the best in life!!!
dana - the woman that was proposed to. ....(non-registered)
David, I just want to say I'm so very glad that God sent not only one great guy in my life, but two! I am so very happy to have gotten to meet you & develop a great friendship that I hope never ends!
You are a great artist & I'm proud that Curtis asked you to do our story!!
Now onward to the big day!!
Thank you again for being there. ... As a great friend & a great photographer ♡